The Vikings: Voyage to America

History channel 2006 Leif and his crew travelled from Greenland to Norway in 999, and after being blown off course to the Hebrides where they stayed for much of the summer, Leif arrived in Norway where he became a hirdman of King Olaf Tryggvason. Leif also converted to Christianity, and was given the mission of introducing the religion to Greenland. The Saga of Erik the Red and the Saga of the Greenlanders, both thought to have been written around 1200, contain different accounts of the voyages to Vinland. The two only known strictly historical mentions of Vinland are found in the work of Adam of Bremen c. 1075 and in the Book of Icelanders compiled c. 1122 by Ari the Wise. According to the Saga of Erik the Red, Leif apparently saw Vinland for the first time after being blown off course on his way to introduce Christianity to Greenland. According to the Saga of the Greenlanders, Leif had heard the story of merchant Bjarni Herjólfsson who claimed to have sighted land to the west of Greenland after having been blown off course. Leif in turn approached Bjarni and bought his ship, gathered a crew of thirty-five men, and mounted an expedition towards the land Bjarni had described. Leif's father Erik was set to join him, but dropped out after he fell from his horse on his way to set sail, an incident he interpreted as a bad omen. Leif followed Bjarni's route in reverse, and landed first in a rocky and desolate place he named Helluland (Flat-Rock Land; possibly Baffin Island). After venturing further by sea, he landed the second time in a forested place he named Markland (Forest Land; possibly Labrador). Finally, after two more days at sea, he landed in a place Leif named Vinland (Wineland). There, Leif and his crew built a small settlement which was called Leifsbúdir (Leif's Booths) by later visitors from Greenland. After having wintered over in Vinland, Leif returned with a cargo loaded with grapes and timber to Greenland in the spring. On the return voyage, Leif rescued an Icelandic castaway and his crew, an incident that earned Leif the nickname "Leif the Lucky". Modern recreation of the Norse site at L'Anse aux Meadows. Research done in the early 1960s by Norwegian explorer Helge Ingstad, and his wife, archaeologist Anne Stine Ingstad, identified a Norse settlement located at the northern tip of Newfoundland. Known as L'Anse aux Meadows, it has been suggested to be one of Leif's settlements, particularly the Leifsbúdir settlement. It was their work that found definite proof that Norsemen had reached America about 500 years before Christopher Columbus. Later archaeological evidence suggest that Vinland may have been the areas around the Gulf of St. Lawrence, and that the L'Anse aux Meadows site was a ship repair station and waypoint for voyages there. That does not necessarily contradict the identification of L'Anse aux Meadows with Leifsbúdir, as the two sagas appear to describe Vinland as a wider region which included several settlements. The Saga of Erik the Red mention two other sites in Vinland; a settlement called Straumfjord in the north, and one called Hóp in the south.

The Vikings: Voyage to America 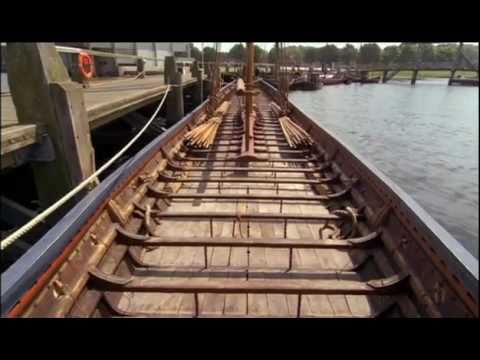 History channel 2006 Leif and his crew travelled from Greenland to Norway in 999, and after being blown off course to the Hebrides where they stayed f...