Hundreds of years ago in faraway Iceland the Vikings began to write down dozens of stories called sagas - sweeping narratives based on real people and real events from their great adventures in Europe, Asia, and North America..

The term Viking from Old Norse víkingr is customarily used to refer to the Scandinavian explorers, warriors, merchants, and pirates who raided, traded, explored and settled in wide areas of Europe, Asia and the North Atlantic islands from the late 8th to the mid-11th century.

These Norsemen used their famed long ships to travel to Constantinople and the Volga River in Russia and on into the Caspian Sea and as far south as Baghdad, and as far west as Iceland, Greenland, and Newfoundland. This period of Viking expansion – known as the Viking Age – forms a major part of the medieval history of Scandinavia, England, Scotland, France, Frisia, Holland, Belgium, Spain, Portugal, Sicily, Ireland, Germany, Russia, Poland, Latvia, Estonia, Finland ,Ukraine, Moldova and Italy.

There were two distinct classes of Viking ships: the "long ship" and the "knarr". The long ship, intended for warfare and exploration, was designed for speed and agility, and was equipped with oars to complement the sail as well as making it able to navigate independently of the wind. The long ship had a long and narrow hull, as well as a shallow draft, in order to facilitate landings and troop deployments in shallow water. The knarr was a dedicated merchant vessel designed to carry cargo. It was designed with a broader hull, deeper draft and limited number of oars used primarily to maneuver in harbors and similar situations. One Viking innovation was the 'beitass', a spar mounted to the sail that allowed their ships to sail effectively against the wind.

The period from the earliest recorded raids in the 790s until the Norman Conquest of England in 1066 is commonly known as the Viking Age of Scandinavian history. Vikings used the North Sea and Baltic Sea for sea routes to the South. The Normans were descended from Danish and Norwegian Vikings who were given feudal overlordship of areas in northern France — the Duchy of Normandy — in the 10th century. In that respect, descendants of the Vikings continued to have an influence in Northern Europe. Likewise, King Harold Godwinson, the last Anglo-Saxon king of England, had Danish ancestors.

As early as 839, when Swedish merchants are first known to have visited Constantinople, Scandinavians served as mercenaries in the service of the Byzantine Empire. In the late 10th century, a new unit of the imperial bodyguard was formed which traditionally contained large numbers of Scandinavians. This was known as the Varangian Guard. The word "Varangian" may have originated in Old Norse, but in Slavic and Greek it could refer either to Scandinavians or Franks. The most eminent Scandinavian to serve in the Varangian Guard was Harald Hardrada, who later became king of Norway (1047–66).
Important trading ports during the period include Birka, Doerstad, Hedeby, Kaupang, Jorvik,  Ladoga, Novgorod and Kiev.

Generally speaking, the Norwegians expanded to the north and west to places such as Ireland, Scotland, Iceland and Greenland; the Danes to England and France, and settling in England and Normandy; and the Swedes, Gotlanders and Frisians to the East, founding the original Russia State under prince Rurick at Novgorod. Also, according to the Icelandic sagas, some Norwegian Vikings went to Russia and Eastern Europe.

Genetic Studies
Studies of genetic diversity provide some indication of the origin and expansion of the Viking population. The Haplogroup I1 (defined by specific genetic markers on the Y-chomosome) is sometimes referred to as the "Viking haplogroup". This mutation occurs with the greatest frequency among Scandinavian males: 35 percent in Norway, Denmark and Sweden, and peaking at 40 percent within western Finland. It is also common near the southern Baltic and North Sea coasts, and then successively decreases the further south geographically.

Genetic studies in the British Isles of the Y-DNA Haplogroup R1a1, seen also across Scandinavia, have demonstrated that the Vikings settled in Britain and Ireland as well as raiding there. Both male and female descent studies show evidence of Norwegian descent in areas closest to Scandinavia, such as the Shetland and Orkney Islands. Inhabitants of lands farther away show most Norse descent in the male Y-chromosome lines.

A specialized surname study in Liverpool demonstrated marked Norse heritage, up to 50 percent of males who belonged to original families, those who lived there before the years of industrialization and population expansion. High percentages of Norse inheritance—tracked through R1a1 haplotype signatures—were also found among males in the Wirral and West Lancashire. This was similar to the percentage of Norse inheritance found among males in the Orkney Islands.

Recent research suggests that the Scottish warrior Somerled, who drove the Vikings out of Scotland and was the progenitor of Clan Donald, may himself have been of Viking descent—a member of Haplogroup R1a1.

The R1a group is of Iranian origin, thought to have originated in what is now Ukraine 15,000 years ago, Baltic, Slavic, and Germanic males have high percentages of Iranian DNA . 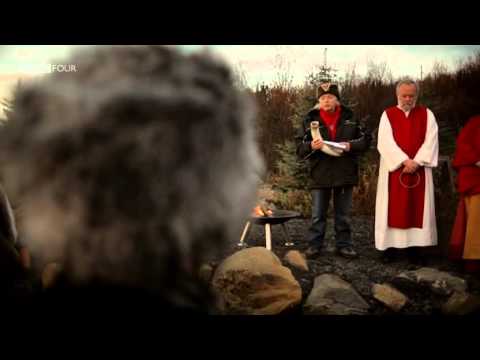 Hundreds of years ago in faraway Iceland the Vikings began to write down dozens of stories called sagas - sweeping narratives based on real people and...